Phobos is a product developed and maintained by Petabridge and it provides Akka.NET users with the ability to quickly and easily instrument their production Akka.NET and Akka.Cluster applications with monitoring, distributed tracing, and more.

Phobos is a library - and it automatically injects telemery instrumentation inside your Akka.NET actors so you can record trace and metric data at runtime.

Phobos uses OpenTracing and App.Metrics to export your data to various tracing and reporting systems that support those open source .NET standards - you can see a full list of supported tracing and metrics libraries here.

You can consume that data inside dashboard tools such as Grafana, Jaeger, and more.

Fundamentally, Phobos works by instrumenting Akka.NET actors behind the scenes. You can install Phobos via your organization's private Phobos NuGet feed via Sdkbin and install the appropriate Phobos.Actor.* NuGet package: 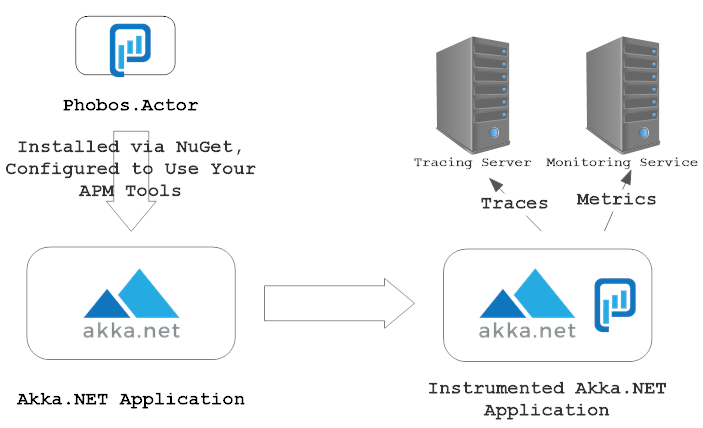 Once you've installed the appropriate Phobos NuGet package you can activate Phobos with the PhobosSetup class.

And with that all of your Akka.NET actors using Phobos will automatically record monitoring and tracing events which will subsequently be published to your configured tracing and monitoring systems. 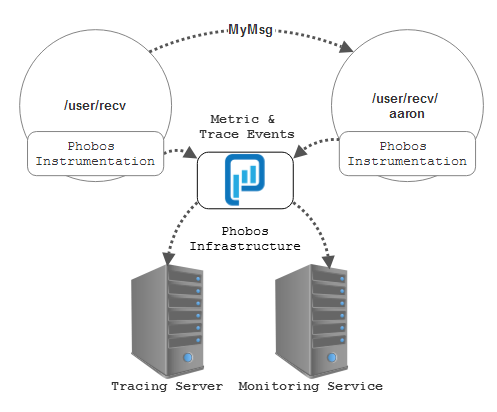 Phobos is specifically designed for use within highly available, large scale software systems built on top of Akka.NET and Akka.Cluster.

Phobos' tracing technology works transparently across Akka.Remote connections and Phobos' monitoring infrastructure automatically gathers metrics on both a per-node and cluster-wide basis. To leverage Phobos in a large Akka.NET Cluster all you have to do is instrument each node with the same monitoring and tracing endpoints, and this will allow the monitoring and tracing systems Phobos integrates with to automatically capture and record metrics consistently across the cluster.

How to Get Phobos

To get Phobos you will need to buy a Phobos license, which costs $4,000 per year per organization. This will allow you and your team to use Phobos throughout your organization's projects.