Phobos attempts to capture as much data as is relevant automatically, without the need for explicit instrumentation code inside your Akka.NET applications.

The following article articulates all of the data that is captured automatically by individual actors as well as each ActorSystem that is instrumented with Phobos.

Tracing data is only captured when an actor is processing a message that either:

Once a trace is active Phobos will automatically attempt to capture the following data each time an actor processes a message:

Here's an example of what a single captured trace might look like inside Zipkin using the Phobos.Tracing.Zipkin driver package: 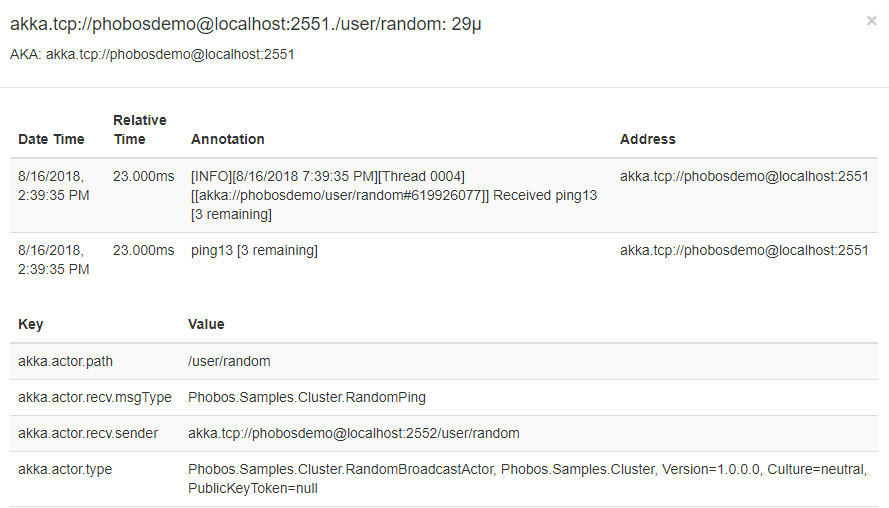 The results for how this information will be displayed to you will vary a lot by the capabilities of each tracing back-end, but generally speaking this is how the data is captured via Phobos.

In addition to the data above, Phobos will also capture the other following types of activities automatically so long as there is an active trace available:

Monitoring data is captured when actors are processing messages, but data is also captured during other system events that occur independently of actors too.

Suppose you have a large Akka.NET Cluster - ideally you'd want to be able to monitor all of these values on a per-node basis and a cluster-wide basis. "I want to see how busy node 1 out of 13 is, but I also want to see how busy all 13 nodes are in aggregate." Phobos.Monitoring supports this as well by reporting all metrics on both a per-node and aggregate basis across the entire cluster.

If you want to capture your own custom metrics in addition to what we capture above, you can read about how to instrument your own Akka.NET monitoring metrics here.

Phobos automatically denormalizes all of these captured metrics into multiple dimensions, keeping track of metrics at both the cluster level and the node-specific level. You can read more about the dimensions actor metrics are recorded in here.